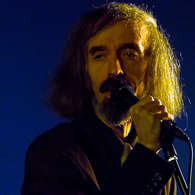 Efim was born into a Jewish family of singers in Chisinau, Moldova. His grandfather sang in several Moldovan and Romanian synagogues as a visiting cantor, and his mother and sister were both professionally trained singers. From the age of six, Efim sang in Chisinau’s Jewish Music and Drama Theatre under the direction of Ruvim Levin.

In 1992, Efim’s and Susan Ghergus’ joint project, the “Jewish Song Theatre,” toured Moldova and a number of European countries; in 2000, they won first prize at the Solomon Mikhoels International Jewish Song Contest. Since 2005, Efim has been involved in several international projects, including the Klezmer Alliance, the Pro-Yiddish Project, Besarabish and the Yiddish Vocalists. Efim is also active as a teacher, and has composed numerous Yiddish songs which have been performed and recorded by prominent musicians including Adrienne Cooper, Shura Lipovsky, Daniel Kahn, Andrea Pancur, Lorin Sklamberg and Lucette van den Berg.

In addition to his intense performing and teaching activities, which take him throughout Europe and North America, in recent years Efim has also created several unique projects based on his archival work; these include a collection of Yiddish songs from the Gimpel Theatre in Lviv (1889 -1939), Hasidic bilingual songs (in Polish/Yiddish and Ukrainian/Yiddish) of the late 19th to early 20th centuries, and songs to Yiddish translations of poems by 20th century Russian poets. Since 2013, Efim has been teaching the art of Yiddish singing online.