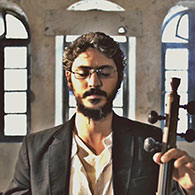 Yagel is a kamancheh and ney player, a poet, a composer of piyutim (traditional religious songs) and a teacher of Middle Eastern music.

After completing his studies at the Jerusalem Academy of Music, Yagel earned a master’s degree in philosophy at Ben-Gurion University of the Negev, and was awarded the Daoud Al-Kuwaiti Scholarship for musical excellence.

Yagel specializes in performing and composing music based on maqam, the Middle Eastern modal system. He studied the Persian form of maqam, known as dastgah, with Prof. Piris Eliyahu and his son Mark Eliyahu, and Arab maqam with Prof. Taiseer Elias. As a child, he absorbed the liturgical poetic tradition of the Moroccan piyut (religious song) at his grandfather’s home in the southern Israeli city of Dimona, where every Shabbat, a group of paytanim (composers and singers of piyutim) would gather. Later, he delved into the secrets of the baqashot (“supplications”), a Sephardic mystical singing tradition practiced by Moroccan Jews. Yagel’s ensemble, Shir Yididot, performs original reinterpretations of this tradition that situate the baqashot within the broader context of Middle Eastern mystical song. The group released its debut album in 2016.

Yagel is also the founder of the Study Center for Makam and Piyut, where he teaches composition and performance, as well as theoretical performance studies based on Jewish sources – philosophy, Kabbalah and Midrash. He also founded the School of Oriental Music in the Negev in the town of Yeruham, and Kedem, a school for composition in the spirit of maqam in Jerusalem.