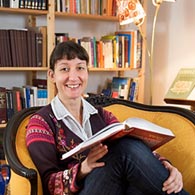 Shoshana is a Judaist and musicologist who has been studying various aspects and subject areas of Jewish and Israeli cultural history for over two decades. A member of the Center for the Study of Jewish Music in Jerusalem, she has taught at the Hebrew University of Jerusalem and currently holds a teaching position at the Institute of Near and Middle Eastern Studies of the Ludwig Maximilians University in Munich. In addition, she has served as moderator in numerous discussions with filmmakers in various contexts, including festivals and retrospectives of the Jerusalem Cinemathèque and at the Munich International Film Festival. Since 2001, she has also been working for the Goethe Institute, both in Germany and abroad.