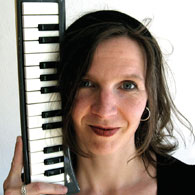 is a highly sought after klezmer accordionist. She first studied ethnomusicology and then took up accordion studies in Amsterdam. She specialized in Yiddish instrumental music since 1992, and later also studied music from south-eastern Europe.

Sanne was co-founder of Di Kalles (NL), probably the first-ever all-female klezmer band, and Khupe (D), an international renowned duo. In the course of time she played in several klezmer ensembles with different line-ups and styles. Currently she's playing with Klezgoyim, Trio Yas, and You Shouldn't Know From It.
She also gained experience as a theatre and studio musician.

"Sanne's accordion is nothing to sneeze at..."
Ari Davidow, Klezmershack