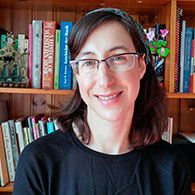 Naomi an Ethnomusicologist interested in the intersections between Ashkenazi music and the Israeli sphere, mainly in the home. Her Masters thesis, gained from McGill University, looked at the Spanish and Portuguese influence on the Ashkenazi liturgy in London in the late 19th century. Her dissertation, written under Professor Edwin Seroussi, focused on the paraliturgical piyyutim of Zemirot Shabbat sung around the Sabbath table among religious Zionists in Israel, and included ethnographic fieldwork and analysis of extended family repertoires. Other interests include: the domestic music of German speaking Jews, musical maps, and popular Israeli music, especially Mizrachi pop.

She is a lecturer at the Open University, at Schechter College of Jewish Studies, Efrata College and at the cantorial department of Hebrew Union College. She is a postdoctoral fellow at the Daat Hamakom Center for the Research of Modern Jewish Cultures of Place. Current projects in Daat hamakom include an interactive map of “kol mekadesh shevii: a wandering melody as a cultural map”, and a project on the historic recordings of inter-religious musical exchange in Ottoman and mandatory Safed.