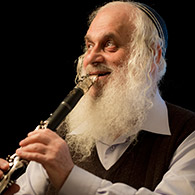 Born on December 18, 1938 in Tel-Aviv, Moussa Berlin is the the foremost representative of the klezmer tradition in the Land of Israel, the patriarch of a style that has also produced such fine clarinetists as Gershon Kletzkin and Chilik Frank. Moussa’s father was a Modzitzer Hasid. Berlin is not himself hasidic, but much of his work since the early 1970s has been for the various hasidic groups. He studied at a National Religious yeshiva and first came into contact with klezmer music when he heard Avrom Segal – at that time the leading klezmer in Israel – at Mount Meron during the annual Lag Ba’omer pilgrimage in 1952. A self-taught clarinetist, Moussa began to attend Lag Ba’omer at Meron regularly, and from 1961 onwards learned the repertoire and style at Segal’s side. In 1973 he succeeded Segal as the lead clarinetist there. Already in the 1960s, Moussa began to learn repertoire from 78 rpm recordings of European and American klezmorim, introducing it to Israeli audiences a decade in advance of the American klezmer revival.

In 1984, Berlin formed the group Sulam which also included the well-respected Soviet-emigré jazz musician, Roman Kunsman. Berlin held a day job as a software engineer until 1990, when he became fully professional as a musician. He plays for all sectors of Israeli orthodox society and is the only of Israel’s orthodox klezmorim to also regularly perform for secular audiences in Israel and to maintain contacts with klezmer revivalists in the US and Europe, performing together with musicians such as Joel Rubin, Brave Old World, and the Klezmatics. He is thus an important transitional figure in the history of klezmer music in Israel.

He has performed in Germany, Switzerland, Poland and Russia, and has produced radio programs, tapes and CDs, held workshops, and taught practical courses at Bar-Ilan University. In the words of Moussa himself, when playing, the klezmer “should behave like the instrument, in humbleness, without any foreign thoughts in mind except those concerning the music. More than that, the player ... should keep in his mind only the thought: how to make my music so that ‘the hand of the Lord’ ... will lay upon us. In Judaism, music itself is only a means to bring upon us the heavenly inspiration”.