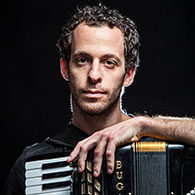 Ira was raised in Hatzeva, a town in southern Israel. He began playing the accordion at age eight, and at sixteen, moved to Jerusalem to attend the Israel Arts and Science Academy, where he underwent comprehensive musical training, graduating with honors in 2002.
In 2008, Ira enrolled in the interdisciplinary music faculty of the Rubin Academy for Music and Dance in Jerusalem, where he became the first student to be awarded the Erez Rapoport scholarship of excellence.
Ira’s main focus is Balkan and Lautari music. During several visits to the Balkans, he attended lessons and workshops with some of the world’s finest Balkan musicians, including Vinko Stefanov (MK, Kocani Orkesta"), Paul Stanga (RO), Plamen Dimitrov (BG), Toncho Tonev (BG), and the renowned accordionist Petar Ralchev (BG), with whom he also performed in Israel.
Ira has performed with several symphony orchestras in Israel, both as a soloist and as an orchestra member, and has participated in numerous theater productions at the HaBima National Theater and "Yiddishpil," Israel’s national Yiddish theater.
In addition to performing, Ira has also composed accordion music, songs, theater music and orchestral arrangements. In October 2016, he moved to Berlin, where he has been exploring new musical horizons.