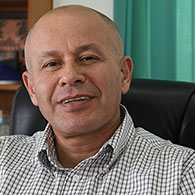 Growing up in Tel Aviv-Jaffa, Ibrahim realized at an early age the importance of a shared society and the need for Arab and Jewish citizens – in Israel in general, and in Jaffa in particular – to live together in harmony, interact on an equal footing, and respect each other's values and beliefs.

Since 1983, Ibrahim has been active as a community worker in Jaffa. After years of working with poor families from the area, he became the director of the advanced youth department in the inner-city Ajami neighborhood of Jaffa, where he worked with 'street corner youth' in the domain of education and vocational training.

In 1988, Ibrahim was appointed director of the social project renewal in Ajami. In this capacity, he organized and planned projects with professionals and residents to solve social and economic problems in the neighborhood.

In 1994, Ibrahim became the director of the Arab-Jewish Community Center in Jaffa. Under his leadership, the center has become a unique institution in Israel. As a ‘hands on director,' Ibrahim is involved in every aspect of running the center: personnel; budgets; the organization and supervision of discussion groups and social activities; organizing lectures and seminars on the Middle East peace process and Arab-Jewish relations; and special programs involving schools, Sunday schools, youth organizations, choirs and summers camps.

In 2000, Ibrahim became co-director of the Citizens’ Accord Forum.
He is active in organizations that address the issue of a shared Arab and Jewish society in Israel through cultural disciplines such as theater, music and art, as well as organizations that promote social and cultural understanding.