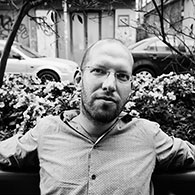 Gershon is a musician, composer and a teacher of klezmer music. He graduated from the Tel Aviv Academy of Music and used to sing and play in the folk music band of the Israeli army. In 2006 he created a klezmer band called Oy Division which is now well-known far beyond the borders of Israel. With Oy Division, Gershon has performed at numerous festivals all over the world and recorded 3 albums of instrumental music and political folk songs in Yiddish and Russian. In 2010 he created the Baba Yaga Band which focuses on authentic performance of Gypsy and Slavic music. The band has participated in many festivals in Israel. Gershon Leizerson has launched a course in klezmer fiddle; he is teaching at the Mizmor College of Jewish Folk Music in Tel Aviv. Currently, Gershon is into composing songs in Yiddish and instrumental music with his new project – “Gershon Leizerson & The Yiddish Blues Drifters, ” as well as playing concerts with his other bands.

Gershon  specializes in playing authentic secular klezmer music as well as ancient hasidic nigunim. Gershon lives in an orthodox community and performs frequently at hasidic conventions and at hasidic and orthodox weddings. In his unique playing he combines the religious with the liberal sides of Jewish music.