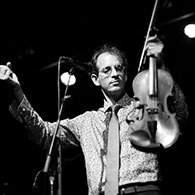 The Israeli violinist, dancer, actor, and singer has been living in France since 2007, where within a short time he established himself as one of the leading artists of the French klezmer scene. He plays with various klezmer ensembles, including The Beigalé Orkestra (Klezmer Fanfare), Yiddishe Fantazyé Trio and The Belf Project (Old European klezmer from musical archives) as well as Tarafikants (Balkan music), Kabarétalè (songs from Jewish cabaret), and Tish (hassidic table songs).

Offstage, he is also a sought-after klezmer teacher in France and other European countries. Since 2009, he has led klezmer workshops in Gannat, Luzy and Saint-Julien-Molin-Molette (Auvergne, France), Manchester, Edinburgh, Prague and Mikulov, “Fiddlers on the move” (Belgium), Klezkanada (Canada) as well as at Yiddish Summer Weimar.
Amit plays and teaches the violin only “by ear.” He had learned klezmer mostly from listening to and imitating audio archives, eventually developing his own style and sound: rustic, expressive and rich with nuances.